Application Description: Removal of flux residues from PCB after soldering

Application Description: Removal of flux residues from PCB after soldering

Kunde: Company Kayser Ltd. in Shenzhen
Kayser Ltd. in Shenzhen are producing electronic modules for the European market. PCBs are equipped, soldered and assembled in a fully automatic production line. The line has a capacity of approx. 2 million printed circuit boards per year in a three-shift operation.

Electrical components are placed on the PCB in an automatic assembly machine and soldered in a subsequent work step. The soldering process produces flux which remains on the PCB as a residue. These residue forms in contact with air humidity, hydrofluoric acid then attacks and corrodes the board itself. For this reason, the residues must be completely removed from the board before assembly and packaging.

Cleaning of PCBs after soldering was done by a hydrocarbon solvent. The disadvantage was that the printed circuit boards had to be dried afterwards. The cleaning bath also had to be constantly prepared, monitored and replaced as it became contaminated by dissolved flux. Additionally, each PCB had to be manually cleaned of solder balls, which were burned into the surface during the soldering process. With wastewater from rinsing and labour costs, this process had become more and more uneconomical.

For two years now, Kayser Ltd. has been cleaning printed circuit boards using CO2 snow jet processes from acp systems AG. This involves blasting the relevant part of the circuit board with CO2 snow crystals. The main advantages for Kayser are:

By using the CO2 snow blasting process, Kayser Ltd. saves time and above all production costs. In addition, the quality of the products could be stabilized with this process, which is an important argument for European customers. 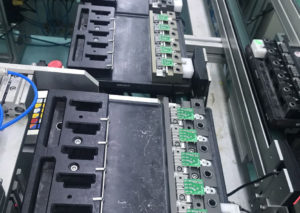 contactHow can we help you? Let’s have a conversation.